It’s been months since I posted. It turns out life with twins as a grad student is a little busy, and then you add in the holidays, and you end up with a bit of a hiatus. I also think I’ve sort of been stuck in this rut where, unless a post is some sort of profound meditation on life and parenthood and whatnot, I don’t post it, and frankly, inspiration isn’t easy to find for the sleep deprived whose days are an endless cycle of feeding, changing, snuggling, and playing with babies. So, I’m going to try to get back into posting with less pressure on myself for every post to be some sort of major epiphany.

I figured I’d start with showing you the girls’ room lately, which has gone from a baby space to a space that better functions as a twin toddlers’ room. We’ve changed it around a lot to meet their needs as they are now very nearly ten months old. I know. Two months away from ONE YEAR. It’s insanity how the time has both crept and flown. (You can find the original nursery reveal here.)

I wanted the girls’ room to be more of a play space as they are now starting to be mobile and into everything, and I wanted them to have a safe space to explore. They got a lot of awesome toys from friends and family for Christmas, so we desperately needed some toy storage. Luckily, my husband is a super handy guy, and he built something amazing after seeing a few of my ideas on Pinterest.

To make space, we took out the futon and put in a secondhand chair. I will say, I am SO GLAD we had the futon for the first 8 months. Just to be able to lie down in there, or to rest the babies on either side of me in Boppies and feed both at the same time, was wonderful. I highly recommend a bed or couch in a nursery.

Anyway, here’s the space now, with before and afters for comparison.

Here’s a closeup of the new toy storage, built by my awesome husband! 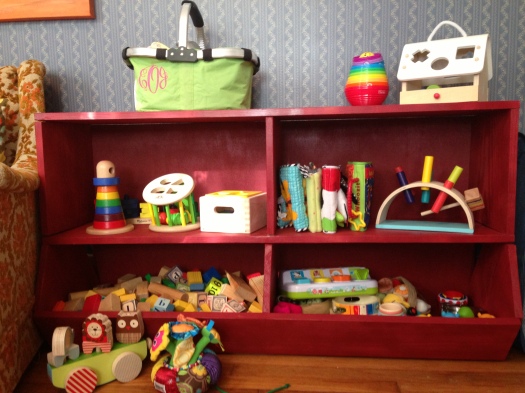 The girls can crawl right up and grab blocks and toys out of the bottom bins, and if they’re sitting up, they can reach the shelf. As soon as they’re pulling up, it will be even more accessible. It was important to me that the toys be in view so they could easily see their options and get them for themselves. I had a feeling this would work better than a box or bin, because stuff on the bottom of a bin would be forgotten and never played with.

Here you can see the bucket we got to store stuffed animals, as well as one of my favorite things in the entire room, the canvas with the Vonnegut quote. It was a gift from a friend I met through Twitter, a “you survived” gift after all I went through getting the gals into the world. It is from a story in which a character is delivering a baptismal speech for twins, so it’s super apt. It says, “Hello babies. Welcome to Earth. It’s hot in the summer and cold in the winter. It’s round and wet and crowded. On the outside, babies, you’ve got a hundred years here. There’s only one rule that I know of, babies– You’ve got to be kind.” I think it’s a great rule.

Overall, the girls have the best-decorated room in our house, and we still haven’t bought a single new piece of furniture beyond the cribs, which were a gift from their grandparents. As I type, the girls are playing in the floor and I’m sitting in the chair.

One Reply to “time flies: a nursery grows up”