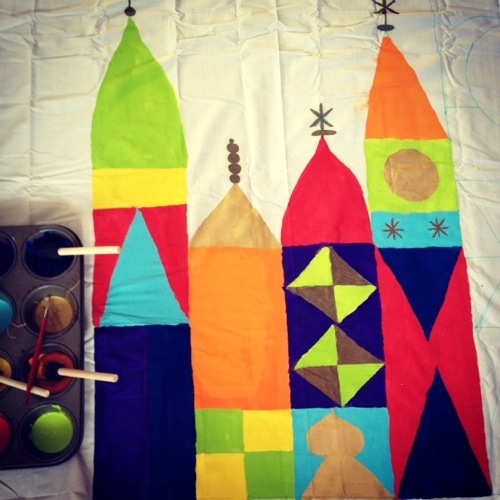 As I sat on the floor during naptime, muffin tin full of paint by my side, sponge brush in hand, Pinterest open on the laptop beside me, painting a replica of the exterior of It’s a Small World on a sheet, it hit me: 1) I might be insane, and 2) I was perfectly prepared for such a 2nd birthday party-planning moment as this by my deeply nerdy childhood. Specifically, by my involvement with Odyssey of the Mind, aka OM.

Did you do OM? Have you even heard of it? It’s an international creative problem-solving competition for kids. Picture TED Talks, if TED talks were actually entertaining, by which I mean, presentations that solve the world’s big problems, but enacted as short skits by kids wearing costumes they made themselves in front of sets they designed themselves, while speaking lines they wrote themselves. (I mean, maybe TED presenters should have to wear handmade costumes, and then I’d be interested.)

The year my team went to WORLD COMPETITION (in the metropolis of Ames, IA), our skit was about the dangers of substance abuse, and had to involve the work of an impressionist artist. So, our skit was about Toulouse Lautrec, hopeless alcoholic, in love with a can can dancer he could never have, and her efforts to convince him to stop drinking. Our set, like Lautrec’s work, was pastel on cardboard. I remember hand-dying a lace thrift-store dress to just the right shade for my can can dancer costume. And, though I was only a fifth-grader, I wrote our whole skit in rhyme, incorporating and interpreting the works of Edgar Allen Poe. Our team was comprised of 7 girls, and our girliest, blondest member dressed in drag to play Lautrec. Basically, when Moulin Rouge came out a few years later, I was certain Baz Lurhman ripped us off.

Another year, our problem was something historical, and our skit interpreted the French Revolution. Instead of seeking world domination, our Napoleon was trying to market a new energy snack, Power Balls, which were shot out of a small working cannon, and his enemy and arch-rival Wellington was trying to rip him off. I had some super techy boys on my team that year, so there was a Steve Jobs vs. Bill Gates vibe to the rivalry. I played Josephine, a hapless secretary. There was a mime in the style of Marcel Marceau. And the whole thing, again, was in rhyme.

After this kind of extra-curricular, throwing my kids an elaborate yet homemade birthday party almost seems too easy. Sure, I can make It’s a Small World setpieces and sew custom dresses, but don’t I also need to work in a moral lesson and maybe some rhyming? Will there be a spontaneous round where I just brainstorm creative solutions to weird problems? And is there a medal at the end? Can I go to World Competition in some small town in the midwest, maybe?

Instead, there are no medals. I’m just in the throes of birthday party planning for my almost two year olds, and I’ve gotta admit, I’m loving it. In an age of Pinterest overload and crazy party-planning moms, it turns out, I might be in my element. 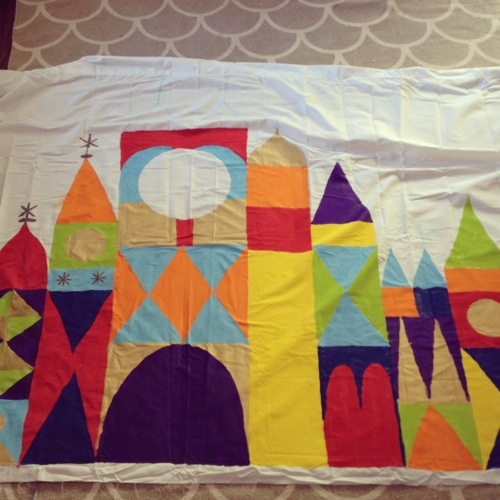