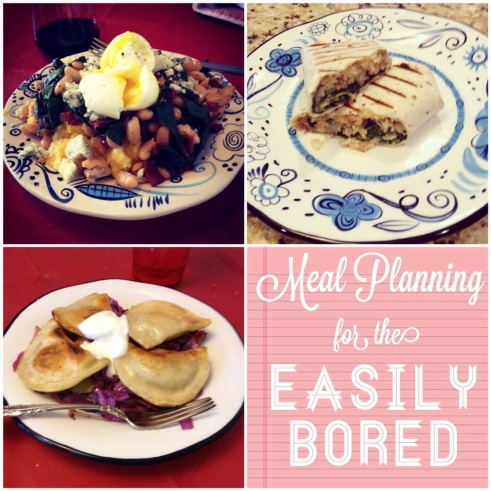 I used to live a block from the grocery store. I never had to plan our meals further than an hour or two before dinner time, because I treated the store like my own personal pantry, running over to grab whatever I needed for that day’s meals. Now that my grocery outings involve at least one, sometimes two children in tow (depending on if Etta and I go while Claire’s at preschool), I just can’t go to the store that often. Now, I plan at least a week’s worth of meals at a time. But, since I also feel that cooking is a fun, creative outlet for me (and I like to eat good food), I try really hard not to get into a meal-planning rut– I like to rotate between a few methods and try lots of new recipes. I figured I’d share my methods, and also solicit yours.

A few key pieces of info: we are largely meat-free but not vegetarian, instead choosing to eat less meat and when we do eat meat, to eat locally/sustainably/ethically raised meat whenever we can. We do eat eggs, fish, and dairy. Also, we’re not super adventurous in the breakfast department, so I don’t have to think about that much. Cereal, almond milk, yogurt, eggs scrambled with leftover veggies and cheese, and fruit are about as varied as we get most mornings. Lunches are leftovers for adults, toddler tapas for the kiddos– they have crackers or bread, cheese, raw veggies, hummus, fruit, boiled eggs, beans, etc. that I keep in the fridge and mix up regularly. So, I’m mostly planning dinners, about 5 dinners per week with at least one leftover night and one meal out. 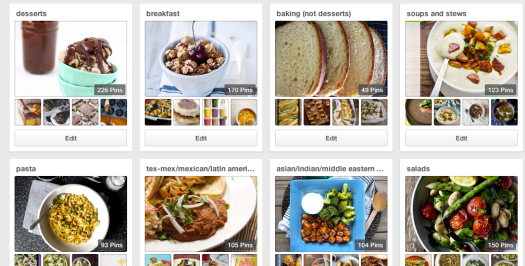 I love Pinterest. For me, it’s not just some sort of aspirational fantasyland full of outfits I’ll never try and DIY’s I could never master, but an actual, useful tool. Before it came around, I, an avid food blog reader, had tons of folders of bookmarked recipes to try. The problem with that method was, no matter how descriptively I titled the bookmarks, it was hard to tell what was what. Pinterest solves that, because it’s visual, and makes scrolling through bookmarked recipes like flipping through a cookbook looking for a picture of something tasty.

The key to this method is to hyperorganize your pin boards. I have them divided into categories like: Mexican, Asian/Indian/Middle Eastern, Soups and Stews, Vegetarian, Seafood, Pasta, and Chicken. Then it becomes a matter of choosing 5 recipes from several different boards, so in one week we’ll have a pasta dish, a taco/enchilada/burrito type dish, maybe a homemade pizza, a stir fry, and a soup and salad night. I open up each recipe in my browser, make my grocery list on my phone and write the names of the dishes at the top of the list so I can easily find them when it’s time to cook. Then, for my own future reference, after we’ve had a meal, I go back and leave myself comments on the recipe pins letting me know if we liked it and what I would do differently if I made it again. If a recipe flat out didn’t work, I delete the pin.

Method Two: There’s an App for That 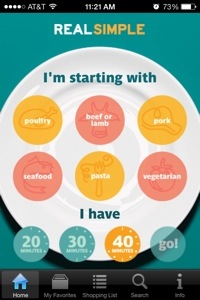 This is a new thing I’ve only been trying recently. I have a couple different cooking apps on my phone, including Real Simple’s No Time To Cook and Martha Stewart’s Everyday Food. I did a week of recipes from the Real Simple app over the last week. I opened the app, chose Vegetarian and 30 minutes or less, scrolled through, and picked out several dishes.

Our meals for the last week and a half included: salmon and green beans with brown butter and almonds, red bean and spinach burritos, polenta with blue cheese and garlicky chard, and pierogi with sauteed red cabbage. Our last meal of the week was a use-up-the-leftover-veggies dish of veggie fried rice. Things I liked about this method: It was easy to find and choose recipes, none of them had a ton of weird ingredients, and they all truly did come together quickly. What I didn’t like: several of the meals just didn’t seem hearty enough, so I had to doctor them a little. The salmon and green beans were delicious, but to me, the meal needed a carb/starch, so I added lemon-y risotto. The red bean and spinach burritos were delicious, but I added cumin and chili powder to the beans and grilled my burritos in a panini pan to make them more special. The polenta with blue cheese and garlicky chard was a great starting point, but needed protein, so I added white beans and soft-boiled eggs– now I can’t imagine having that recipe without the “sauce” of a soft egg on top.

Overall, I will try this method again, but I will definitely keep in mind that I may need to add to or spice up the recipes.

Method 3: Pick a Cookbook, Any Cookbook

I usually use this method with my Mark Bittman cookbooks, either The Food Matters Cookbook or How to Cook Everything Vegetarian. I’ll page through the book, pick a handful that look tasty, maybe a snack or dip or two, too, and make my meal plan that way. I love Bittman’s less-meatarian philosophy, and his recipes are simple, delicious, and always very adaptable to any number of variations. I’m sure this method could work well with whatever your favorite cookbooks are. A perk to the Bittman books: you can get the complete How to Cook Everything and How to Cook Everything Vegetarian as apps on the iPhone for $10ish, much cheaper than the books themselves.

There are other methods I haven’t tried, like, oh, actually looking at circulars and deciding a menu based around that, largely because I’m driven by the recipes themselves, and because I’ve already cut our grocery bill substantially by cutting most of our meat and processed foods. One of the nice things about having the Pinterest, cooking and cookbook apps, though, is that if I get to the store and notice say, avocados are 99 cents, I can call an audible and pull up a taco recipe or something and swap out one of the others.

What about you? Do you meal plan? Where do you get your menus?

2 Replies to “meal planning for the easily bored”