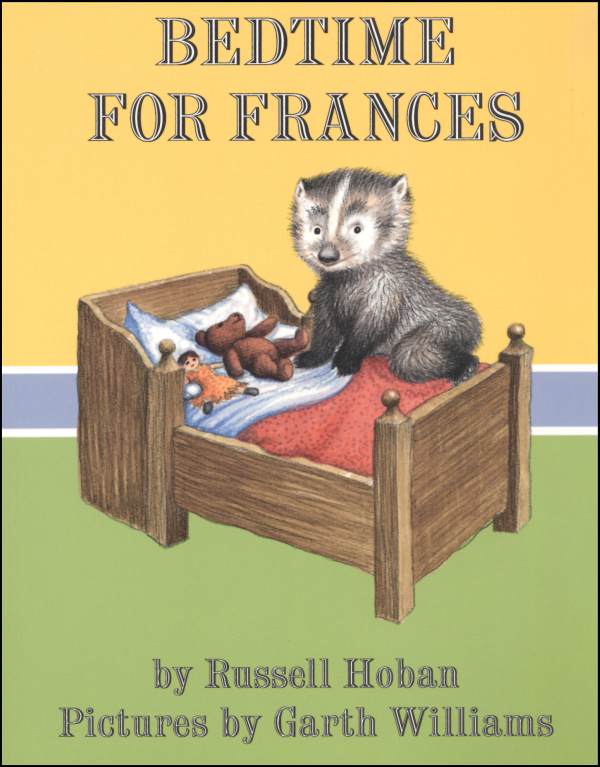 We have the book Bread and Jam for Frances. It’s a book I remember loving as a child. A picky-eating badger turns her nose up at her mother’s cooking a few times too many and finds herself eating bread and jam for every meal, until she gets sick of it and decides to try new things. Luckily our girls haven’t been particularly picky, but they seem to enjoy the story, even if to them “bread and jam is just for breakfast.”

Today at the library, I saw some of the other Frances books. I asked the girls if they’d like to try them, and they picked out Bedtime for Frances. In this story, Frances keeps coming out of her room after bedtime, because of tigers, giants, and scary cracks in the ceiling. Her parents are at first bemused and then increasingly frustrated. And then all of a sudden, Frances’s father says that if she comes out again, she’s getting a spanking.

“What’s a spanking?” sweet four-year-old Claire asked. “Well, sometimes parents hit their children on their bottom when they do things they aren’t supposed to do. Kind of like how you sometimes get time outs. We don’t like to hit, so we don’t do that,” her dad explained

I’m thankful my kids have made it to four years old and find it unthinkable that an adult would hit a child, that they’ve made it this far and don’t even know what a spanking is. I wish I could say that I find the idea of hitting my children unthinkable, but the truth is, I have wanted to. Children have their ways of pushing you to the limits of your energy, patience, empathy, and self-restraint. I have been so tired, angry, and frustrated with my children that I wanted to hit them, that I felt that impulse. But that’s what it would have been if I had given in: impulsive, angry, and wrong. It wouldn’t have been about teaching them, it would have been about me lashing out in my anger. The only thing it would have shown them is that I am no more capable of managing my emotions and impulses than they are.

I am not one to say “there but for the Grace of God go I” very often, but this is one of those areas where I really do feel it’s only grace that has kept me from that brink. It’s only the whisper in my ear that tells me to walk away, take a breath, make a different choice, hide in my room if I have to long enough to cool down. Because maybe giving a kid bread and jam for every meal for a while is creative parenting, but bedtime spankings don’t make sense to anyone in my family, even in my tiredest, most rock-bottom moments. Thanks for the reminder, Frances.

*Note: I’m not interested in debating spanking with you. I only presume to know what is best for my family.*

One Reply to “a spanking for frances?”