As he mentions, I’ve been trying to get my husband to write down the story of the girls’ birth and my near death for a while. I’ve written extensively about the experience and its aftermath, but my perspectives are blurred by my trauma, my sedation, and my lack of a medical degree. Here we are four years later, and both Claire and I are healthy and strong. I will always have a heart defect, and she will always have spina bifida, but it feels so good to take a moment and realize how far we’ve come from those very scary early days. Here is that story in the words of my husband Jon, pediatric ER doctor, love of my life, and amazing dad to two very lucky little girls:

I told Sarah I’d write this down over 4 years ago. To be a guest blogger.

I’m not the writer she is (obviously), but she’s not the doctor I am (thankfully).

I have told the story of how I spent one terrifying night in the hospital with all three of my girls in three different ICU’s many times. However, I was recently telling someone, and was having difficulty remembering the sequence of events, and I knew I had to write it down.

My first feeling after Etta and Claire were born was that of overwhelming joy. My first thought upon seeing Claire, was about how much worse her spinal defect was than I was expecting. Her defect had been, after all, so small that all we had seen on prenatal ultrasound was a subtle finding of her head being slightly more oblong than expected. While trying to look at her spine on ultrasound, nobody was ever able to see the defect. Therefore, we assumed it was very small. I was not prepared to see her open spine seemingly taking up her entire lower back.

She was whisked away to children’s hospital, where she was expertly taken care of, had an amazing course, and is exceeding all expectations. 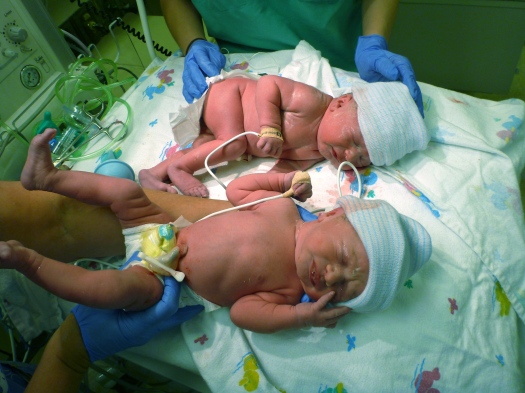 The story I want to tell, though, is about Sarah.

In the first 2 exhausting days, she was learning how to breastfeed. She had lost so much blood during the C-section that she required a transfusion. She was dealing with lots of pain, both physically as she was recovering from surgery and adjusting to the huge shift of fluids and weight, and mentally, as she was separated from Claire. However, she was slowly improving and gaining a small amount of endurance, and gaining hope that we could all go visit Claire, who was recovering from her own surgery, soon. 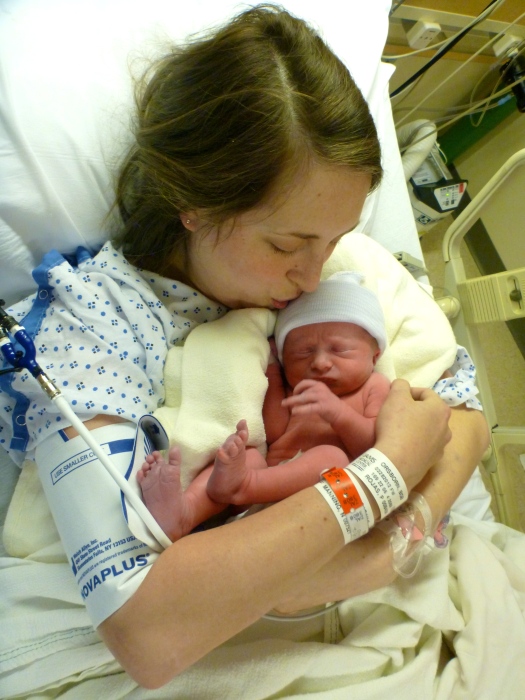 Sarah was doing so well that they asked us if we wanted to go home. We decided to stay for one more night, to work on breastfeeding another day with Etta and the lactation consultant, and to gain a bit more strength before giving it a go on our own.

The next day, on a bright, sunny, Sunday morning, Sarah was walking the 8 feet back from the bathroom all by herself for the first time, and she started feeling short of breath. “Well, that’s OK,” I thought. “You made it! Way to push yourself!” Sarah sat and tried to catch her breath, but couldn’t, so we called the nurse. She came in with a pulse ox monitor and put it on Sarah. It read 80. I knew something was wrong.

“No, you go call the doctor, right now” I responded. You can’t deep breathe out of a pulse ox of 80.

The OB intern entered next. She looked at Sarah from the doorway (never got close enough to listen), and seemingly nonchalantly (although I’m sure she was terrified) said “I’ll order an EKG.”

I’m not sure what she was thinking, because I was only thinking one thing. PE. I thought Sarah had a pulmonary embolism (a blood clot in an artery to the lungs, a possible surgical complication), and needed a CT scan of her chest at minimum, if not just starting treatment for it.

During all this time (it felt like hours) Sarah was slowly getting more short of breath. I was desperately trying to remain calm and let the doctors and nurses do their job, but I also requested that the intern please call her attending.

I happened to have her attending’s cell phone number, so I also called her. She didn’t answer, and I’m sure I left the most pitiful, desperate message about the poor state of my wife’s health she’s ever heard.

Well, Sarah became more short of breath, and they called a MET call, meaning a rapid response team that included ICU nurses and respiratory therapists came to help. They applied more monitors and attempted to place an oxygen mask on Sarah. However, at this point, I could hear crackles when Sarah was breathing from the doorway, and realized she was getting worse. She was hypoxic still and likely in her oxygen hunger, she felt smothered by the oxygen mask and was pushing the respiratory therapists away. She would occasionally steal panicked looks to me with her expressive eyes saying “Help. Please. Now.” 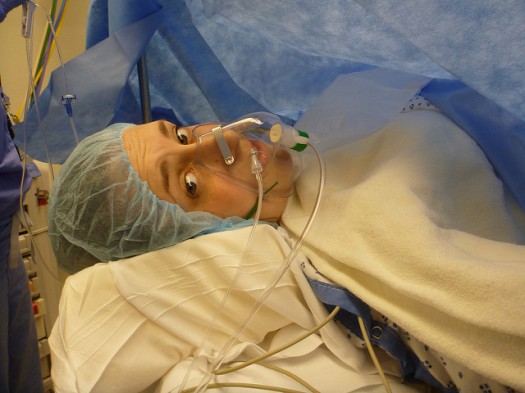 I felt helpless, though. At some point (I can’t remember when) the nurses took Etta away from me and to the nursery. I stood there and knew what needed to happen. Sarah needed to be sedated and intubated. I didn’t know what was going on exactly, but I knew that. The respiratory therapists called the ICU residents, who came, evaluated Sarah and talked to me. They recognized me.  I recognized them. They said “We need to intubate your wife, are you OK with that?” Which is crazy, because why would they ask my permission? But it was an awkward situation for them I’m sure. I said “yes, please!”

I certainly didn’t watch them sedate and intubate my wife. I pushed back the thoughts that this might be the last time I saw my wife alive. That I might be tasked with the job of caring for my two beautiful babies all on my own.

A CT got ordered, and Sarah was taken to the CT scanner, which is by the ER. I somehow met up with her dad, who is also an ER physician, and we headed to the ER to get a first look at her chest CT, fearing we would see a PE. We found a resident, who scanned through the images with us, and we saw nothing. No answer. Why then?

Sarah got moved to the ICU, and I met Mack, her nurse. I also saw a frantic intern who scrambled to examine her, attempt to get enough of the story to get some orders in and present her during rounds, which were starting. I was allowed to listen in on rounds, and was able to ask for a lactation consult—knowing that her milk was just coming in, and not wanting her to be in pain. I’m sure they had to tell the lactation consultant how to get to the ICU-they don’t go there much.

I then remember the OB attending, Sarah’s doctor, meeting me in the ICU waiting room. Saying how sorry she was to miss my call and having rushed in to see how Sarah was. So sweet. Everyone cared so much.

They asked me multiple times if Sarah was an alcoholic… because Sarah took such a high dose of sedation to keep her calm. She was calm, but quite awake. We would tell her where she was, and she would answer with her eyes and her eyebrows. Quite lucidly. She seemed to be aware.

At some point during that Sunday, she had a bedside echo performed by the first year cardiology fellow. The report was: it was a limited view, but looked OK. Still, no answer.

I took a break from her bedside and her mom stayed with her. I went to see Etta, who was in the nursery ICU, as they no longer have a regular nursery. She was in a crib all alone in a big room. I held her and sat and tried to process, but couldn’t. What was wrong with Sarah? Would she pull through?

I think it was later that night when we got word that the cardiology attending had looked at the echo and said no, it wasn’t normal. Sarah in fact had exceptionally poor function. The pieces started coming together.

I stayed with Sarah that night. When the night respiratory therapist came in to evaluate, I had seen that they had taken about 6 liters of fluid off of Sarah and she was breathing very comfortably. “What’s the plan tonight for weaning her vent support” I asked. “Oh, I guess I can work on that tonight” was the reply. She started bringing down her support to “normal” levels throughout the night.

Then, when I just snoozed at about 1am, I woke up to beeping. I found Sarah, with her eyes wide open, holding her breathing tube out to the side of her face. She had a look of shock and confusion I will never forget. She had pulled out her tube! I called the nurse to evaluate, and he put her on oxygen, but she continued to breathe easily. They reduced her sedation and she slowly became more cognizant and talkative. I was so relieved that she was back.

I can’t imagine life without her.

Tapas brunch at @ultreiadenver. The toast/njuda/fried egg situation and the FRIES: SO GOOD.
😍
Your love is better than chocolates (because you know I would rather have this massive bag of Sour gummies)
Beany Baby #ernieandeleanor