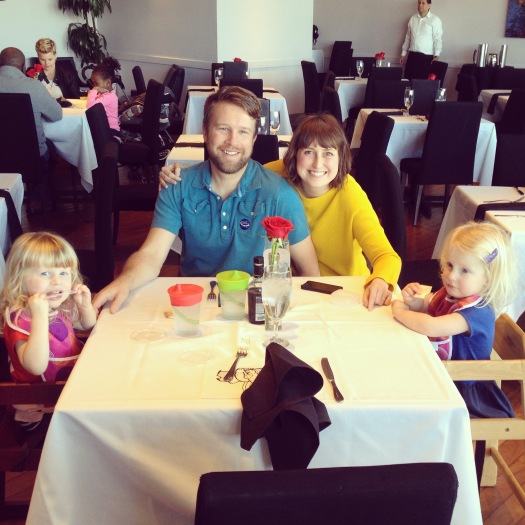 Kids in restaurants have been a hot topic lately because of a restaurant owner who definitely acted like a jerk over a kid who was maybe or maybe not acting like a jerk while the parents maybe or maybe didn’t do something about it. Until some third party describes what really went down in that situation, I’m not making any judgments about it. 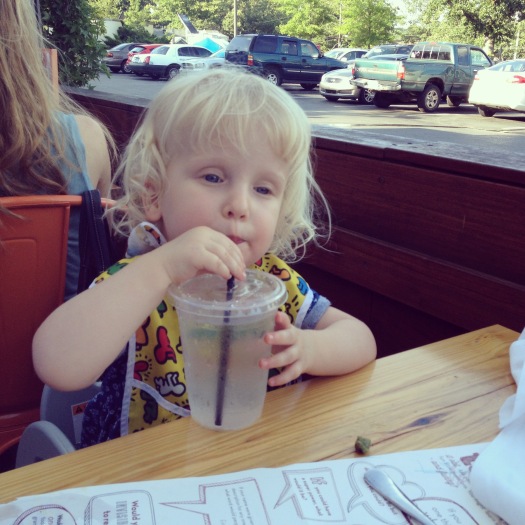 However, as someone who loves food and likes eating out and also has two small humans who often accompany us when we eat out, I did want to talk about eating out with kids. Part of my job as a parent is raising my small humans to be good citizens, who know how to navigate social situations, who know how to act in public. Eating out is part of that. And you can’t learn how to do that until you actually do it. Our kids have been going out to eat with us for all of their three years of life. The best times were probably when they were infants. We could put them on the floor in their baby buckets…I mean, car seats…and they’d sleep the whole dang time while their tired twin parents guzzled cheese dip and margaritas. Local Mexican restaurants and an Oyster Bar near our house were two favorites. As they got to be older babies and early toddlers, we played to our strengths: we went to noisy places, the types with high chairs and kids menus, and we went EARLY. We took toys and sippy cups, and when they fell apart, we took their butts right out, sometimes even all the way home, although that was rare. Now that they’re three, they’ve had years of practice eating out, and also years of practice of being expected to sit in their high chairs, eating their food, at the table with everyone else, until everyone is finished for dinner at home every night. I can’t remember the last time we actually had a bad experience in a restaurant.

Now, we don’t just have to stick to “family restaurants,” but can even go to places with like, actual table cloths and stuff, like in that picture from Forty Two at the Clinton Presidential Center, which may seem fancy, but also has a very courteous wait staff and a GREAT kids’ menu. Strangers have actually remarked to us on several occasions how cute and well-behaved our children are in restaurants, and we smile and tell them thank you, it took a lot of practice, and if they weren’t being cute and well-behaved, we wouldn’t be staying long.

The way I see it: no one else should ever have a bad time at a restaurant because my kids are being annoying. Generally, if a place has high chairs and booster seats, I assume my kids are welcome, and I expect that they will behave appropriately– otherwise we won’t be sticking around. We don’t take them to bars, though we have taken them to a local brewery, Lost 40, where they enjoyed the heck out of drinking water from little flight glasses and eating cheese dip and bratwurst. (Jon happens to love their beer, so we always have a keg from them in our kegerator at home.)

I think the best statement I’ve ever seen on kids in bars was on the menu of a place called The Bird where I had one of the best burgers of my life in Jackson, Wyoming. 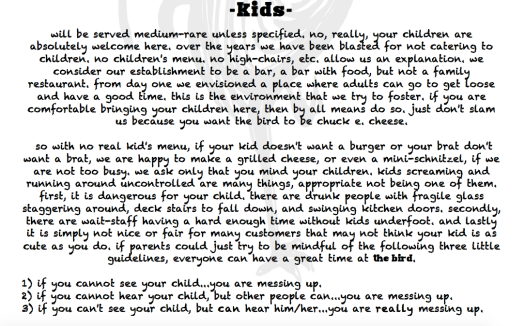 I probably would not take my kids to The Bird, because we like having high chairs, and because it really is more of a bar than a restaurant. Once they were old enough to not need a booster seat? Maybe. But I like that they make their standards clear, and I realllllly loved that burger. I’d hope that if they did have a kid or parents who were “messing up,” they’d just politely ask the family to handle the situation or leave, without, you know, screaming at children.

Parents want to be able to eat out. Kids need to be able to eat in restaurants in order to learn how to act in restaurants. Obviously kids will mess up along the way to learning how to act, and it’s on the adults around them to model correct behavior, like asking people to leave *politely* if they’re being a disturbance, like getting the heck out of Dodge if your kids are consistently being obnoxious/tired/emotional/loud. If everyone did that, everyone could have a good time not just at The Bird, but in every restaurant.

6 Replies to “on babies in bars and kids in restaurants”