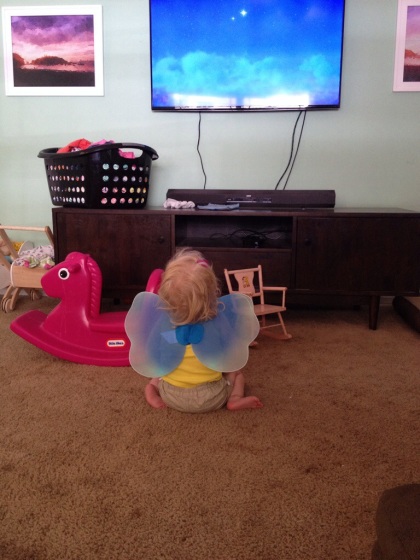 In order to write this post, I have to first give up the charade that my kids don’t watch tv. I had lofty goals of no screen time til two, but caved around 18 months, and haven’t looked back. They aren’t glued to the TV all day, but my kids watch something every day. I have two year old twins. If we want to eat, they will likely have to watch a show while I cook dinner. I have amassed a small collection of Disney DVDs I don’t hate, and the girls have come up with their own names for them. Slowly, I have figured out what they mean.

BEES!: A Bug’s Life. All bugs are bees. I have long ago stopped freaking out when my kids shout about a bee in their presence. It’s probably a fly.

BINGERBELL!: Any of the 5 Tinkerbell movies. It could also be Tangled, which my girls seem to think is about Tinkerbell in desperate need of a trip to the salon. “She needs haircut,” Claire says. You figure out which movie they mean. Good luck.

TOYS!: Toy Story 1 or 2. Whichever one you’re least tired of at the time. Eventually I need to add Toy Story 3 to the rotation, but I’m putting it off because it makes me ugly cry.

The Bear Movie: Brave. I’m pretty sure Claire actually roots for the big scary bears in this film– perhaps because, since we always call her Bear Bear, she thinks she’s one of them.

Anna Movie: Frozen. I have the only kids in the world who think Anna is the cooler character, here.

Monsters: Monsters Inc. The only movie Etta ever wants to watch, and, coincidentally, one that makes Claire actually shake with fear and say “no, Monsters, no!” Etta loves Monsters. She draws them, paints them, enjoys drinking out of a sippy cup emblazoned with them, and talks about them all the time, sometimes while growling like one.

MOUSE!: Ratatouille. Don’t think for a second that enjoyment of this film will make your toddlers want to eat ratatouille, though.

EMO!: Finding Nemo. Sometimes I mute it and just leave the DVD menu on the screen like some kind of pretty screensaver. I like to imagine Emo is a spinoff about Dory and Marlin’s future child, who has a real melancholy streak, a garage band, and a collection of rare Dashboard Confessional bootlegs.

What about you– do any of your kids have funny names for favorite movies or characters?

5 Replies to “a toddler tv glossary”