Here’s the big secret no one tells you about parenting: we’re all winging it. But the bigger secret is: that seems to work beautifully most of the time. Before I had kids, I was worried about my maternal instincts. I wasn’t sure I had what it takes, wasn’t sure things would kick in like they should. Now, I’m not so sure I believe in maternal instinct so much as this: I spend more time with my children than I have ever spent with anyone except myself, thus, I know them almost as well as I know myself. I sense things about them. It sometimes seems like outright ESP, but the reality is, I pick up on even their tiniest signals, because I am with them all. the. time. And when you know someone that well, you do more than just finish each other’s sentences– you anticipate each other’s moods, needs, etc.

This was proven again recently when, upon hearing my girls one morning, just woken up across the hall from us, babbling and giggling to each other across the room in their cribs, I thought, “These kids are ready for toddler beds. I bet they’d like to get up and play and cuddle and chat with each other in the mornings, instead of being trapped in their cribs.” So, that day, my husband and I took a side off of each crib and put up the toddler rail, and just like that, our babies (aged 19 months) had toddler beds.

It has been amazing. They LOVE their big girl beds, and I am so glad I trusted my gut. Etta, who was bounced to sleep in her Baby Bjorn bouncer for every nap and night of her 19 months, gave up the bouncer and now goes awake into her bed and falls asleep there. Claire, who has been held and cuddled to sleep for every night of her 19 months…well, she would still prefer to be held, but she goes drowsy but awake into her bed without too much protest most of the time. (Except the last couple nights, in which she has been a bear whether held or placed in bed. I’m blaming teeth.) And in the mornings and after naps? Most of the time this crazy thing happens where they wake up and either wind up hanging out together in one bed, or they get up and play for anywhere from 15 minutes to an hour. As I write this post, Etta has been down for a nap, and though she woke up an hour ago, I’ve been listening to her talk, sing, and play for an entire hour. (Though, for the sake of honesty, this morning they woke up and immediately began a full on brawl over the same blue stuffed monkey.)

Like any baby milestone, part of me is a little wistful and sad, because no more cribs is just another step out of babyhood. But, as with most things, the new step has been so positive, has been such an opportunity to see them growing and becoming themselves, that I feel excited and happy that I get to be here witnessing it. They were ready, so we did it. I am so very glad. 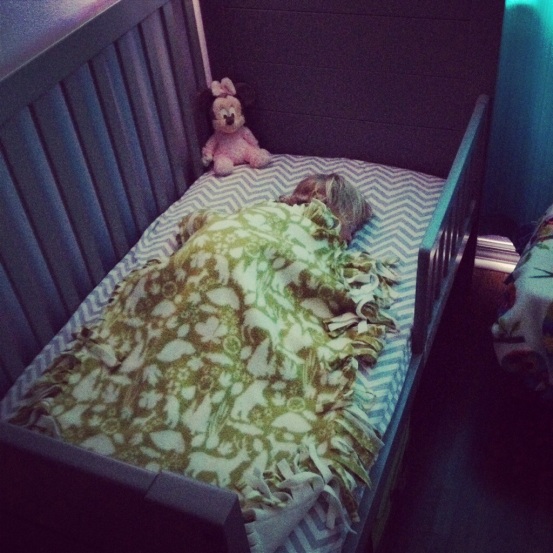 5 Replies to “toddler beds and going with my gut”