Four years ago today, we were working in our downtown garden when a homeless friend named Justin walked up holding an impossibly tiny, impossibly flea-covered kitten. “I just found him,” he said, “and I can’t take care of him and don’t want him to be a hobo cat. Can you take him?” I took one look at the tiny furball and knew I had to help him find a home. 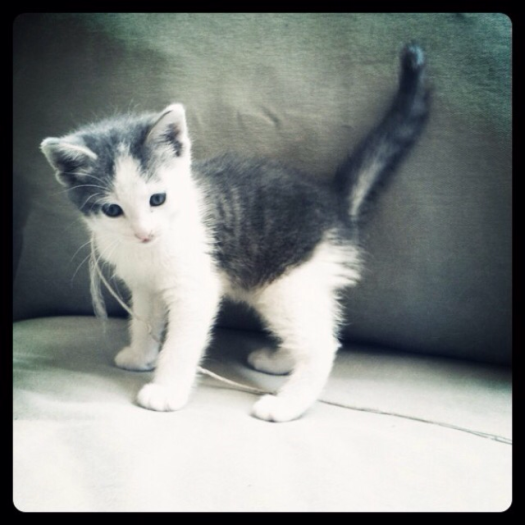 I took him home, gave him a bath, picked hundreds of fleas off of him, and promptly fell in love.  I didn’t want to fall in love, though. We called him Tinycat because we weren’t giving him a name because we were. not. keeping. him. That resolve lasted until the night before he was supposed to go to a new home, and Jon and I both cried and realized we couldn’t bear to part with him.

By the end of that summer, I got pregnant and promptly began spending a lot of time in bed. Tinycat was always by my side. He was my buddy through a difficult pregnancy, and even after the girls were born, he has been amazing with them, always choosing to be near them, allowing them to love him, however rough, and gently training them in how to handle him.

Over the last few months, Tiny has been very sick. It started as a bladder infection, but then either nausea or just distaste for his prescription bladder food caused him to just stop eating. He had been fairly obese, but then he suddenly got scary-skinny, and super sick. He had starved himself into liver failure. Apparently fatty liver syndrome is common when fat cats lose a lot of weight suddenly. At one point, I was pretty sure he was going to die. For the last two months he’s been getting medications and syringe feedings, and it’s been rough on all of us. Now he’s finally starting to gain weight, eat a little food (but still refusing the prescription bladder food), and even act like his old playful, affectionate self again. It’s been like watching him rise from the dead. It finally feels like he’s actually decided he wants to live, and we are so happy.

Happy fourth anniversary, Tinycat. I’m glad you won over this family of “dog people.” Don’t tell Bessie and Olive, but you’re my favorite. Even when you’re being The Worst.

3 Replies to “4 years with Tinycat, and glad he’s still with us”