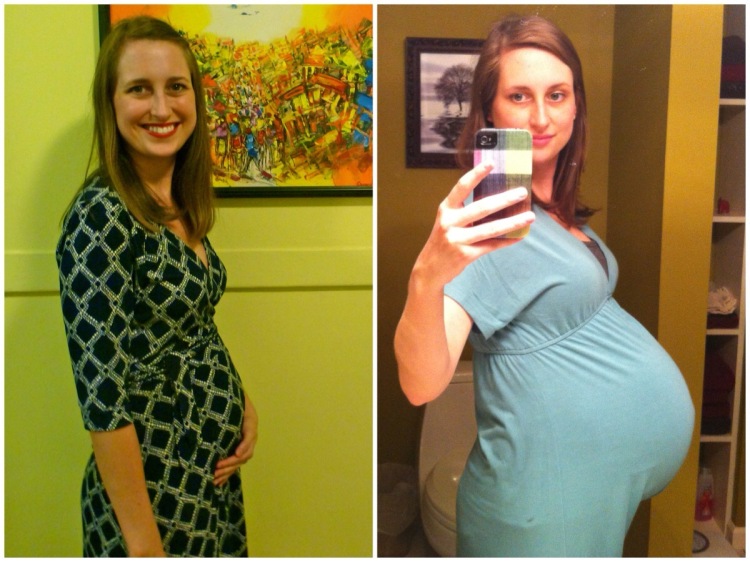 Being pregnant is a very strange experience. I would say “out of body” but it’s really the opposite: it’s deeply embodied. The physical reality of gestating two humans inside of my rapidly changing body radically and forever altered my relationship to myself. When we saw that second blob on an ultrasound screen and learned we were having twins, my husband’s oh-so-charming first words, with tears of joy in his eyes, were “you’re gonna get SO BIG.” He squeezed my hand supportively. I did not murder him because I was in too much shock.

Thus began a 9 month funhouse of physicality. There was never a moment in all that time that my body, my physical self, wasn’t somehow on my mind. I watched my belly and boobs expand, smeared my stretching, itchy skin with lotion, and wondered if I’d get stretch marks. I saw my belly button pop out, never to go back to its innie state. I felt surges of hormones and nausea. In my sleep, I snored like a chainsaw and drooled like a fountain. I discovered that restless leg syndrome wasn’t invented by a drug company but is in fact a very real thing that makes you contemplate DIY-amputation in the middle of the night just to get some relief and rest. I felt my sciatic nerve like never before. I had some of the best hair days of my life. I discovered two babies is enough to make a uterus officially, diagnostically “irritable.” I was constantly aware of the fullness of my bladder and its relationship to my insatiable thirst. I discovered that literally everything caused heartburn.

Strangers noticed my physicality, too, and decided I was an object fit for comment. By mid-pregnancy, everywhere I went, people looked at me like a baby might just FALL OUT at any moment. Sometimes they stopped in their tracks and just said “WHOA” as I waddled by.

But this experience, as mortal as it made me feel, was also deeply liberating. I was both bound by my oh-so-human frame and completely freed from many of my previous hangups. I focused on my diet more than ever before, not in an effort to lose weight, but because I was worried about preterm labor and wanted to grow my twins as big as I could before they would arrive, however soon that might be. I largely relinquished control over my looks and just reveled in my midsection’s seemingly unstoppable growth. I actively tried to gain a pound a week, which felt downright radical in a culture that seems to think women should constantly and forever be working to lose weight.

And then when my babies did come, I was far too busy and too tired to give a flying fig about “losing the baby weight” or “getting my body back.” Thank God.

All of which to say, screw the idea that “pregnancy abs” are something any gestating human should be worrying about. There is now literally no point in a woman’s life where she’s given a break from cultural expectations about her appearance. I went from “too tiny to be having twins” to “so big I must be about to deliver any minute” without a single “acceptable” moment in between. But most of the time, I didn’t even care, because I was enjoying a hiatus from listening to or caring about those voices. I got to experience my body as a body, just doing its bodily thing in a way that was life-changing. I am now more in touch with my physical self, and more admiring of its ability to do what it has to do to keep me and others alive and growing, and I feel downright ragey at the idea that any other woman needs to spend a single precious second of her pregnancy (or any of the rest of her life) worrying about her ABS.

If you’re one of those women who can run races while massively pregnant because that is what you love to do and it makes you feel good in your body? More power to ya. If you’re like me and pregnancy is hugely exhausting and physically draining and just managing to walk feels like winning an Olympic gold medal? More power to you, too. Our bodies are unique, amazing, and OURS. How they should look isn’t anyone else’s business.