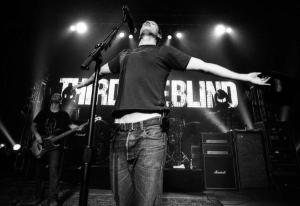 I don’t go to a lot of concerts.  I dislike other bodies touching mine, I hate it when people mosh into me, I hate having to wait through an inevitably crappy opening act, I usually get hot and feel faint, and I find the standing rather exhausting. (Yes, I realize I sound like a real pale and wan pain in the ass right about now.)  But, and I realize this will spoil some of my indie cred, one of my favorite bands in the whole wide world is Third Eye Blind and they played in my town last night and I just had to go.  Even though it was in a venue (the Music Farm) I swore I’d never go back to because it was way oversold the time I saw Band of Horses (oh hey, there’s my cred back) and actually had to leave before the end because I thought I’d pass out from the heat and the stench of the sweat coming off the horde of shirtless goth dudes dryhumping all around me (no lie).  I’ve liked 3eb since their first album came out way back in like 1996, discovering them just as I realized there was newer music beyond my dad’s classic rock (though I still have a soft spot for that stuff).  I have all of their albums and even an EP, and it’s all still in rotation on my iPod.  So yeah, I had to go.

So my husband and I took our old fogey asses to a rock show last night.  And I loved it.  Here are some brief scenes.

So, I’m a happy fan today.  Not sure when I’ll feel up to another show, but I’m glad I went to this one.

One Reply to “scenes from a rock show”