Another delicious week with our Pinckney’s Produce CSA! 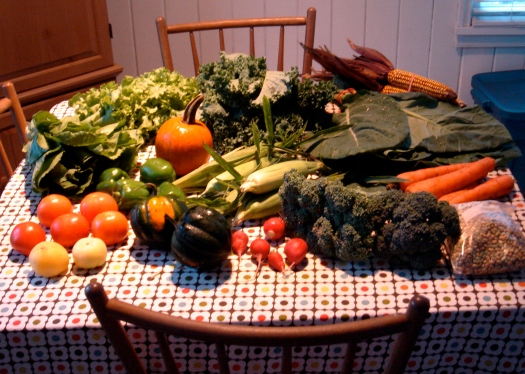 This week our box included:

Click on through to see what we did with it all!

The first night we received the box, I made the pumpkin and squash into a soup to freeze following this recipe from Apartment Therapy’s The Kitchn.  The pumpkin and squash seeds were saved and toasted for snacks.  I also made and froze a batch of corn chowder using the corn.  And I went ahead and cooked the field peas, as I’ve learned to do since I left the first bag of them we received sit so long they got mildewy, with some garlic, onion, and bacon immediately, and I had a bowl of them for dinner that night, as I was home alone.

The next night we had a delicious vegetable curry made loosely following this recipe.  This used up the kale, several carrots, the bell peppers, and the tomatoes, along with some onion and potato I had on hand, and we had it over brown rice.  It was a LOT of food, and made for yummy leftovers the rest of the week, and I decided to freeze two quarts of it, just to see how it turns out.

Friday night we used the collards in the amazing Linguine with Collard Greens and Bacon again, a great accompaniment to an evening watching 30 Rock on the couch with my husband.

Saturday I was in the mood for some fall baking, as this week has been the first with a bit of a chill in the air. I had a fantasy about some sort of pumpkin bread/carrot cake hybrid. I could not find any actual recipe of this sort, so I adapted this spiced pumpkin bread recipe with a couple of shredded carrots in the mix.  It came out amazing. I’m already planning to bake more. I probably could have saved the pumpkin that came in the box and made it into puree to use in the bread recipe, but I had used it in the soup, so I made the bread with canned pumpkin. Still amazing.

Saturday night Jon served up the broccoli, sauteed, with some blackened salmon, and then we went and saw “Where the Wild Things Are.”  Both were yummy.

So that leaves the lettuce and the radishes and a carrot or two– those were eaten in a few salads which I took to work, and on a few burrito lunches for Jon. The decorative corn is in a bowl in our living room.

I think this is the first time we managed to use or preserve everything all in one week, so I’m pretty proud!

5 Replies to “CSA Charleston: we used it all this week!”

Because you need tacos on #nationalmargaritaday, we had shrimp and steak.
Trying to teach children who inherited my lack of coordination to play four-square.
I have not loved every Glossier product I have tried, but consider this an endorsement of Brow Flick and the Gen G lippie in Zip. (Yes, my eyes ARE wildly lopsided.)
Baby Claire belly laughing at the cat rolling a golf ball on the floor. She still has the best laugh.