Today is Martin Luther King Jr. Day. Last year I learned that my state, and many others, officially recognizes both Martin Luther King *and* Robert E. Lee on this day. I wrote to my legislator, but it’s still the case this year. I hope one day to see it changed.

This day is always really interesting to me.  I think Martin Luther King Jr. exemplified the teachings of Jesus in a way few others have. However, when we narrow his life’s work only to racial equality, we oversimplify a man whose mission was one of the radical oneness of all of humankind. Though he was most known for his work on behalf of civil rights and racial justice, Martin Luther King Jr. also fought for the rights of the working class, and was passionately opposed to the Vietnam War and for the cause of peace. He advocated for “intersectionality” before it was a cool buzzword, realizing that oppression anywhere is oppression everywhere. He saw that racism is bound up with classism and militarism, and he fought against all of it.

We still have a long long way to go before his dreams for racial justice, equality, and harmony are achieved in this country. I hope you watch or read the “I Have a Dream” speech today, if you haven’t already. But here, on my little corner of the internet, I wanted to highlight a passage from his 1967 sermon opposing the war in Vietnam (link goes to full text), because its prophetic words about peace and the role of the US in the world still need to be heard today:

This is a role our nation has taken, the role of those who make peaceful revolutions impossible by refusing to give up the privileges and the pleasures that comes from the immense profits of overseas investments. I’m convinced that if we are to get on the right side of the world revolution, we as a nation must undergo a radical revolution of values. We must rapidly begin the shift from a thing-oriented society to a person-oriented society. When machines and computers, profit motives and property rights are considered more important than people, the giant triplets of racism, militarism and economic exploitation are incapable of being conquered.

A true revolution of values will soon cause us to question the fairness and justice of many of our present policies. On the one hand, we are called to play the Good Samaritan on life’s roadside, but that will be only an initial act. One day we must come to see that the whole Jericho Road must be changed so that men and women will not be constantly beaten and robbed as they make their journey on life’s highway. True compassion is more than flinging a coin to a beggar. A true revolution of values will soon look uneasily on the glaring contrast of poverty and wealth with righteous indignation. It will look across the seas and see individual capitalists of the West investing huge sums of money in Asia, Africa, and South America, only to take the profits out with no concern for the social betterment of the countries, and say, “This is not just.”…This business of burning human beings with napalm, of filling our nation’s homes with orphans and widows, of injecting poisonous drugs of hate into the veins of peoples normally humane, of sending men home from dark and bloody battlefields physically handicapped and psychologically deranged, cannot be reconciled with wisdom, justice, and love. A nation that continues year after year to spend more money on military defense than on programs of social uplift is approaching spiritual death.

don’t let anybody make you think that God chose America as his divine, messianic force to be a sort of policeman of the whole world. God has a way of standing before the nations with judgment, and it seems that I can hear God saying to America, “You’re too arrogant! And if you don’t change your ways, I will rise up and break the backbone of your power, and I’ll place it in the hands of a nation that doesn’t even know my name. Be still and know that I’m God.” 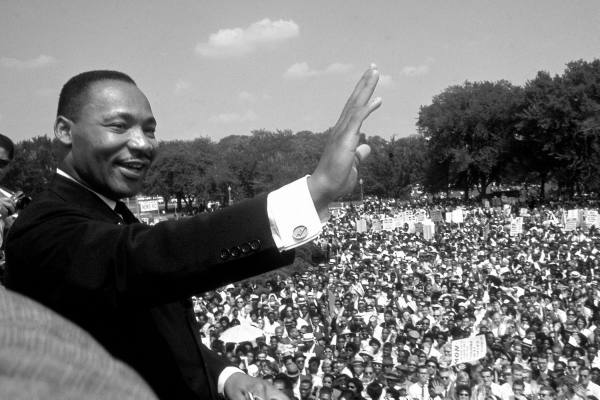