I’ve posted a little bit about feeding my girls, but after a few comments on Twitter and Instagram about Miss Etta’s eating habits, I thought it might be helpful to go ahead and write a more detailed post about my semi-Baby Led Weaning table-food-eating one year old.

We started introducing solids in the form of purees around 6 months, but from the start, Etta wanted little to do with being spoon fed. She likes to do things by and for herself, and the whole thing was largely a very messy battle with her wanting to control the spoon, and very little food winding up in her mouth. By about 9 months, she was still mostly not eating food, so we decided to try “Baby Led Weaning,” which I had mostly heard of on mama message boards. Basically, Baby Led Weaning is giving kids pieces of food that they can feed themselves. I never read the books on the subject, but there are many, as well as websites, so feel free to seek that stuff out. We just started giving her steamed hunks of sweet potato and carrot, about adult finger sized, and from there eventually wound up graduating to just feeding her foods.

These days, my entire fridge is full of little tupperwares of Etta meal components. Then her meals are basically just multiple choice problems. Breakfast is usually fruit+grain+dairy, and lunch and dinner are protein+veggies+grain, with an occasional dairy item thrown in. 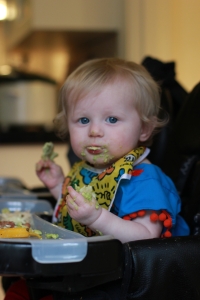 When I have several of the above components, meals just become a simple matter of pulling out the containers and giving her a little of each category. Any time I don’t think she’s eaten a lot of the food, I give her a pouch of yogurt or apple sauce to round out the meal and fill her up. So far, she’s pretty willing to try just about anything, and she’s not very picky. I will be sure to update with a new post once we’re further into toddlerhood!

I know blogging’s been sparse around here lately. I fell off the vegan wagon and the blogging wagon at about the same time. It’s a good thing though: I’m studying feverishly to try and pass the last step between me and an MA in English Literature: the dreaded comps exam. So, expect blogging to resume something resembling regularity sometime after the first week of April, at which point I’m sure I’ll have cute Bufflo Gals’ 1st Birthday photos.

Meanwhile, I’ve got a new routine going in my kitchen, and it involves living organisms.

No, I’m not raising goats or something out in our rented back yard. I started making my own yogurt and now I don’t even know who I am anymore. I distinctly remember a friend saying she made her own yogurt one time, and thinking to myself, “that’s nutty. Just buy the yogurt, ya weirdo.”

Another problem: though Claire loves to be spoon fed (she lives on purees, after all), Little Miss Feeds Herself wants no part of me lovingly spooning yogurt into her mouth. If I let her try to spoon feed herself, every end but the end with the yogurt gets in her mouth, and it’s an epic mess. If I try to feed her myself, it’s an insane battle of waving arms and yelling at me as she tries to grab the spoon while I’m trying to stick it in her mouth. About every 5th bite gets in there, which is nuts.

So, to solve the “my kids eat 8-16 oz of yogurt per day” problem and the Etta loves yogurt but eating it with her hands is difficult problem, I have discovered two solutions.

The first, as I mentioned before, is making my own yogurt. I basically follow this process from Annie’s Eats. I heat half a gallon of milk to 180 degrees to denature the proteins in it (which is apparently important). Then, I pour it into a Pyrex glass bowl and cool it to between 110 and 120 degrees. Then I add a couple of tablespoons of yogurt (at this point, I use the last bit of my homemade yogurt, but my first batch used plain Stonyfield Farm whole milk yogurt), and stir. Then, I preheat my oven for one minute (which gets it to about 120 degrees) turn it off, and turn on the light. Meanwhile I put a lid on the Pyrex and swaddle the whole thing with a few kitchen towels.

I leave the Pyrex in the oven with the light on overnight, for about 12 hours. In the morning, when I wake up, I go in, take off the lid, and it’s yogurt. Well, yogurt swimming in whey. So, I line a colander with either a couple layers of cheesecloth or a thin dishtowel like a flour sack towel, and set it in a bowl (you could just do the sink, but I’m saving the whey because I’m crazy and want to try making whey ricotta cheese), and strain the yogurt until it’s nice and thick and creamy. Half a gallon of milk left overnight yields 1.5 quarts of yogurt and 2 cups of whey. Scraping it off the towel with a spatula is really as tough as the work gets here.

Taste-wise, the homemade yogurt is just as good as the plain whole milk yogurt I was buying. It works great as a sour cream substitute, too. To serve it to the girls, I usually mix it with some pureed fruit and some oatmeal baby cereal so they get a complete breakfast. For snacks or when they need a little something after dinner, I just stir in a smidge of agave syrup for sweetness (because they can’t have honey yet).

This brings me to: how do I get the yogurt into the girl who won’t be spoon fed?

I had seen on Pinterest some reusable baby food pouches that are basically the same as those Plum baby food pouches, except the spout is on the side and the top is like a Ziploc bag. So, after searching on Amazon and reading some reviews, I decided to go with the Yummi Pouch (consider this a mini-review, I guess) because they were cheaper than the Little Green Pouch, which I was also considering. They are awesome, y’all. I just fill them with 4 oz. of yogurt, zip up the top, hand it to Etta, and she knows exactly how to hold it and suck the yogurt out of the spout, a feat she figured out within seconds of having the first drops squeezed onto her tongue and realizing that sweet yogurty goodness was inside that thing.

The Yummi Pouches claim to be dishwasher safe, but I’m not sure I trust my dishwasher to hold it open enough to get clean. So, I’ve been washing them by hand using a bottle brush, and drying them on my bottle rack. Works fine. One tip I did read in one of the reviews: the lids are easy to lose, but are the same diameter as the disposable baby food pouches, so if you use those, just save the lids in case you lose the lids to your pouches. I’ve tried the lids from a GoGoSqueez applesauce pouch and they worked just fine!

Overall, my newfound yogurt-making hobby is saving me money– a 32 oz. container of Stonyfield Farm plain whole milk yogurt costs me $4ish, while an entire gallon of milk, which yields 64 oz. of yogurt, costs the same. So the homemade is literally half the price, with none of the trash of the packaging. And since I also mix it with fruit purees, we can compare the cost to the YoBaby yogurt, which would be almost $11 for the amount a gallon of milk yields in homemade yogurt! Maybe I’m not as crazy as I once thought my yogurt-making friend was!

It’s hard to believe the Bufflo Gals have gone from this: 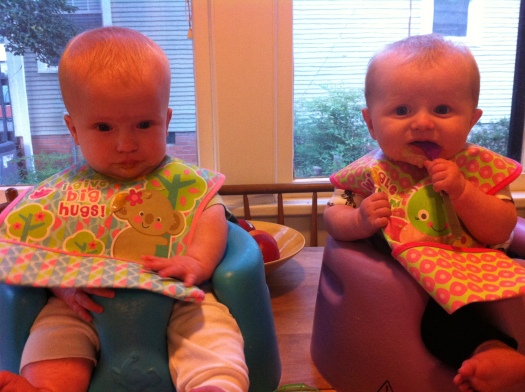 And as they’ve grown, things have changed with the way we feed them around here. Some things have worked great, others haven’t worked out.

I really wanted to make my own baby food.

And then I met my babies. One wants nothing to do with being spoon fed (as I mentioned in an earlier post) and the other vomits the minute she tastes my homemade food. Not just spits it out. Vomits.

At first, I was sort of offended by this. I thought I had a picky baby, since she would happily gobble down jars of purees both veggie and fruit, and then immediately gag and choke on my homemade stuff that, to my eye, seemed exactly the same as the stuff in a jar. In fact, I remained irritated and offended by this for a few months.

And then I finally googled “spina bifida texture issues” and learned that this is common to many babies with spina bifida, and often requires occupational therapy to fix. And then I felt like a jerk.

We’re looking into our OT and PT options and will be getting a referral soon, but in the meantime, I have accepted that homemade baby food is just not our thing. I can make a few very thin varieties that she will eat (like tomato carrot!), but, since straining every puree through a fine mesh strainer is a huge hassle, I will just be buying jarred purees for Claire. There’s a huge variety of organic Earth’s Best foods available, so that’s mostly what we’re going with. I even got over my aversion to pureed meat, because if she’s gonna be on these things for longer than average, I want to let her have some proteins, and the only other option is lentil dinner.

Meanwhile, Etta is doing a sort of half-assed version of Baby Led Weaning. I haven’t read the books, but I’ve read about it on the internet, and, like most of the rest of my parenting, am sort of doing what feels right. She gets soft chunks of things cut into pieces she can hold in her fist. Sweet potato, pasta, carrot, watermelon, cantaloupe, cheese, and toast are all favorites. It’s going pretty well.

Next step: transitioning from formula to milk in about a month, and also trying to transition from bottles to sippy cups. Anyone have tips on that? Both of my girls still have issues with fast-flow nipples, and they nearly drown in sippy cups.