Are you ready for more of my baby room crafty craziness? Here it comes!

Origami has long been a hobby of mine, at least since high school. I find it repetitive, mindless, and relaxing, a great project to do with my hands while I watch TV. One year, while unemployed, I made a ton of origami Christmas ornaments, and was sure glad to have them as unbreakable ornaments this year when I first encountered the combo of Tinycat+Christmas tree. I knew I wanted to do something origami-related for Etta and Claire’s room, and after my success making an origami crane-covered lampshade for my friend Naomi, I decided to DIY another origami crane lamp. Consider this a bit of an origami crane lamp tutorial.

First: you need a LOT of origami cranes. Obviously this varies depending on lampshade size, but I’d say at least 200, maybe more. (If you don’t know how to fold a crane, I highly recommend YouTube. It’s so much easier when you can watch someone’s hands actually folding instead of trying to decipher diagrams.)

I’m really proud of how the lamp turned out, and particularly in love with the cute turquoise base we scored on sale at Target for about $20. Here’s what it looks like in the girls’ room: 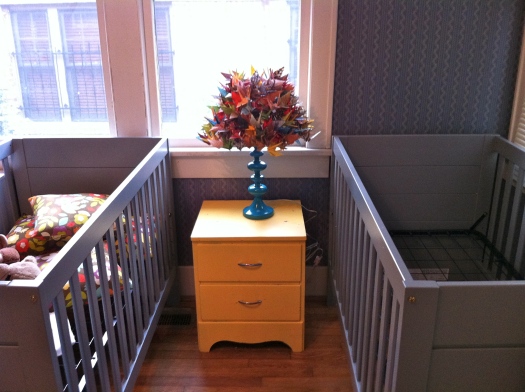 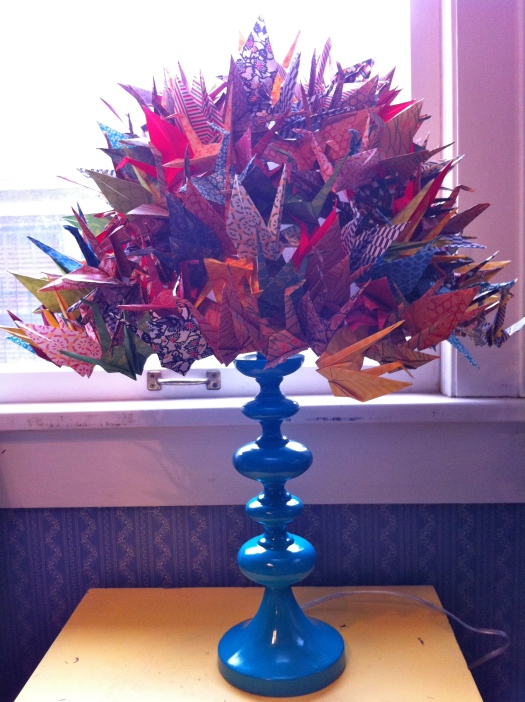 In the end, I actually had some cranes left, so I started thinking about what I could do with them and realized they’d be perfect for a mobile. I bought some small grapevine wreaths from Hobby Lobby for $4 each to use as the base of the mobile, and picked up a $3 spool of crochet thread to string the cranes on. Other than that, I already had ribbon, cranes, and beads, so this ended up a very cheap project! I learned while making crane ornaments that a bead under the cranes keeps the knots in the string from pulling through the fragile paper, and I used a large needle to string the cranes onto the thread. I’m really proud of my finished mobiles and can’t wait to see them hanging over the cribs! (That will be a project for Jon. I have a feeling I should avoid ladders.)

Just for the heck of it, I decided to see if anyone on Etsy was selling anything similar. I told Jon, “I bet people would pay $30 for these!” Sure enough, the one origami crane mobile seller I found was selling hers for $28 apiece, and they didn’t even have cute nests/wreaths, just plain old hoops! Not bad for something made largely of things I already had!

One of my BFF’s (technically half of our BCFFL (Best Couple Friends 4 Lyfe)) is having a BABY GIRL!!!  We’re very excited for our friends, and I fully intend to be this kid’s Crazy Aunt Sarah.  My friend is a really awesome, creative, crafty, thrifting queen, so I knew I really had to step it up in the gift department.  You can check out her awesome Etsy shop of vintage treasures, if you want!

Ultimately inspiration struck in the form of this origami lamp from Sweet Sweet Life, which I think I originally found via Apartment Therapy’s Ohdeedoh.

That lamp was inspired by a lamp that costs over $210.  And I thought, I have origami skills! I could do that! $200+ is ridiculous! Though I’ve been into origami for a while, I really honed my skills when I got laid off in October of 2008 and decided to use my abundant free time crafting origami Christmas ornaments.

Of course, I wouldn’t just make a giant origami lamp for someone’s nursery without asking, but I remembered my friend liking the lamp when I posted about it on Facebook.  So I shot her a quick note and asked if she’d be interested in an origami lamp for the baby’s nursery, and she said sure! I inquired about the color scheme: “i’m planning on doing olive green, lime green, fuschia, light pink, lemon drop yellow and lots of wood grains, burlap and galvanized steel (like those buckets)… if that helps”

So I headed off to Hobby Lobby, where, to my luck, scrapbooking paper was on sale for half off! I selected a variety of large squares, which are normally $0.59 apiece, in the colors she had mentioned, supplementing with traditional origami paper in coordinating colors.  After that came the folding. Holy crap, what a lot of folding.  I’d say it takes about 250 cranes to cover a typical lamp shade.  Luckily, it’s an activity you can do in front of the TV, and luckily for me, Jon knows how to fold cranes, and he helped me with my folding load.  Still, I’d say it was about 12 hours of folding…so THAT’S why they cost over $200.  You can follow this tutorial video to learn how to fold an origami crane.

I applied the cranes to the lamp with a hot-glue gun, which took about 4 hours, during which time I watched “The West Wing” on my laptop– I’m newly hooked on the show, having missed it when it originally aired.

So, there you have it. The Coolest Lamp in the World. The World’s Most Ambitious Origami Lamp Project!  All you need is: a lamp shade, a glue gun, enough paper for around 250 cranes, and a crapload of free time.