Sometimes I can’t resist a cheeky post title. The truth is, I climbed a mountain in Yellowstone, and I never would have thought I could. Not three years ago, when I almost died, but really not even before that, when my heart was weak and had a congenital defect I didn’t even know about, in all the years before I almost died, when I thought I was just a wimp with no endurance.

But when I found out I’d get to go with my husband to a medical conference in the Tetons, I knew I wanted to try to push my limits. I’ve been in “normal cardiac function” range for the last two years, and I’ve been feeling stronger than my old wimpy self. How could I go to some of the most majestic wilderness in the world and not hike? And then, when I started researching hikes and saw that National Geographic had named a 7.2 mile “moderate” hike to the top of Mount Washburn as THE most legendary day hike in Yellowstone, I got a little crazy and decided we had to try it. I mean, they said it was “a day hike that carries the hiker directly into the park’s essence, where its iconic beauty and mystery are on vivid display,” and “this classic hike, a must-do that many do over and over as a virtual pilgrimage, is really about the views.” Who could resist that pitch, even with a bum heart?

I have to be honest, I really didn’t think I would make it up to the top. I figured I would try really hard, but thought I’d get really tired at some point and have to turn back. I warned my husband ahead of time that I wasn’t sure I could reach the top, and he said he was more than willing to just give it a shot.

The hike started out STEEP. It helped that it was through a beautiful meadow, so I had something pretty to look at. My refrain was basically “just keep swimming, just keep swimming.” I found a doable pace and stuck with it.

About 1/3 into the hike, I felt a twinge of pain in my hand and looked down to see my hands were getting REALLY swollen. Swelling is something I am supposed to watch for, so it concerned me a little. Lucky for me, my ER doctor husband is experienced in getting stuck rings off of people, so he helped me get my wedding rings off. He thought maybe the swelling was more to do with the way I was swinging my hands as I walked, plus the altitude, so I started wearing our daypack so I could hold onto the straps and keep my hands elevated. Soon the swelling was getting better.

We got closer and closer to the top, and I was getting shocked by how GOOD I felt. I mean, I felt like I was on the world’s most beautiful stairmaster with ankle weights on, but I wasn’t struggling to breathe, and my heart rate was a reasonable 110ish. Was I really going to do this? Climb the tallest mountain I’d ever attempted on the longest hike I’d ever done? 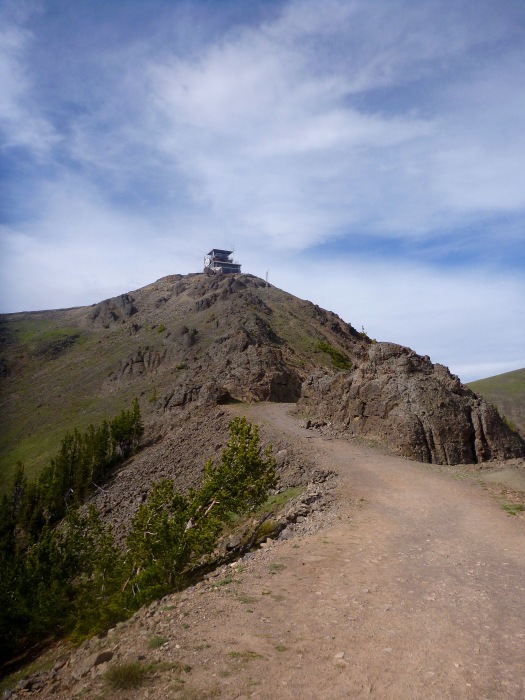 Yes, yes I was. We got to the top where it was windy and chilly. 10,243 feet isn’t something to sneeze at. I sat down in the fire tower at the top feeling shaky, slightly spent, and utterly thrilled. It wasn’t Everest, but to me, it was something like it– something I hadn’t thought I could do, but tried anyway and TOTALLY DID. I’m so glad I got to do this hike with Jon, because he has been on this journey with me all along, and he was just as proud as I was. He signed our names in the guest book and added “congenital heart defect and all!”

Things got slightly more interesting when we got SUPER close to a herd of mountain goats on our climb back down. We quickly realized we were between some adults and some babies and backed off and gave them space. Eventually they got off our path, but later, when we recounted the story to someone back at our lodge, he said he had heard of someone who was gored by a mountain goat and DIED. The idea that it would gore us hadn’t even crossed our minds. We thought at worst they’d head-butt us off the trail!

It was interesting to compare this hike with one we did together when we were dating, before I knew I had a heart defect. I struggled to hike to Hanging Lake, which was half as long as this climb. It’s strange to believe that I’m stronger now, having experienced serious heart failure, than I was before, when I didn’t know I had a heart defect, but it’s true. The medicines I’ve been on for the last three years have allowed my heart to get better, and at my last cardiology appointment, my doctor said, “your heart is STRONG.”

According to Wikipedia, author Elbert Hubbard who climbed Mount Washburn in 1914, wrote, “From the tip top of Mount Washburn you can see the world in much of its glory. It is an entrancing view. You are in love with living. You want to do more of if. You plan to do big things when you get down into the work again.” He’s right. I was in love with living, and so grateful that I get to do more of it. And now I have a new goal, a plan to do big things: I want to climb a “fourteener” some day. 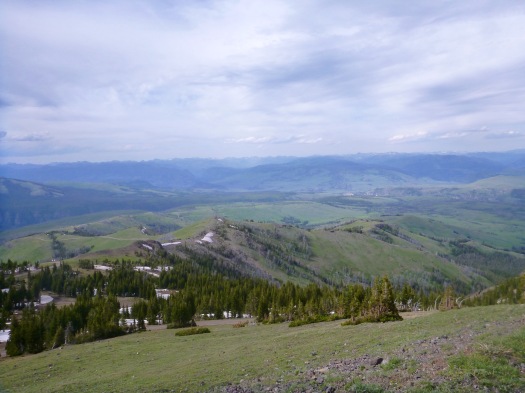 12 Replies to “I got high in Yellowstone”