To me, one of the more fun things about being pregnant is fixing up a room for the babies. I knew from the start I wanted to avoid having a “theme.” None of the rest of my rooms have a theme, so why should the babies’ room look any different? I wanted their room to look like it belonged with the rest of the house, and I knew I had to work with the navy blue floral wallpaper that we renters can’t change. So my goal was to incorporate lots of color and lots of handmade touches to make a room that goes with the rest of our house. I figured I’d share some of my progress so far:

The cribs are actually the only “new” thing in the photo, and they’re BabyMod from Walmart. Cribs were a tough decision for me, because I originally really wanted bright red cribs, which apparently do not exist. Then I thought I’d paint unpainted cribs, which also do not exist, unless I want to pay a zillion dollars or drive 4 hours to the nearest IKEA, which, it turns out, didn’t have the unpainted ones in stock anyway. So we ended up with gray cribs that actually blend surprisingly well with the aforementioned wallpaper. The dresser we already had, and there are three smaller nightstands in the room that we also already had. Even the rug was something we already had.

Early on, I decided moving our futon into the babies’ room made more sense than getting a glider, because this way, I could set the babies down on the couch, sit down in between them, and still feed them even if I were home alone. Also, the futon still functions as a place for guests to sleep, in case anyone wants to stay in a house of craziness, or for one of us to sleep in the room with the babies. It’s actually an espresso brown, I just have a sheet on it to protect it from Tinycat’s hair, since he likes to hang out in there.

To go on the futon, I made 4 throw pillow covers with fabric I happened to already have in my stash, that I think goes well with the rug: 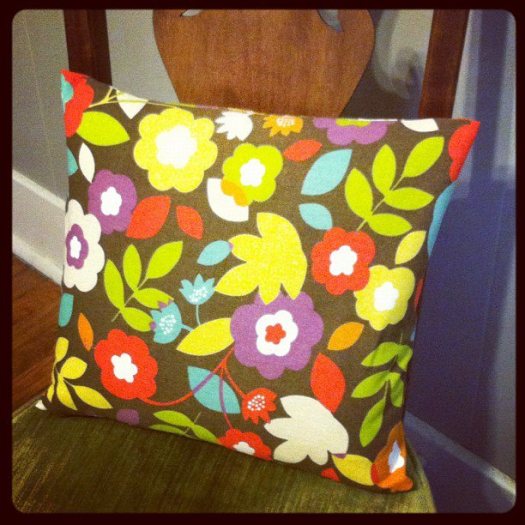 And for Christmas, my dad made these four paintings to go on the wall:

I think the animals are super cute, and he did a great job choosing colors that go with the other things in the room.

Now, while we’re not doing an animal theme, there will be some other animal touches, including some letterpress prints I already had around, and a vintage lamp my stepmom found at a flea market:

I immediately loved the little elephant, but knew I wanted to do something to spruce up his bland, faded shade. Initially, I thought of trying to cover the shade with the same fabric as the throw pillows, but since I’m making the girls an origami crane lamp like the one I made for my friend, I decided to incorporate the same origami paper I’m using for the cranes to make the two lamps “go” together. I cut each sheet of origami paper into 4 smaller squares and ModPodged them to the lampshade in a patchwork pattern. Then I glued some rickrack trim around the edges. I’m really proud of the results (though everything I ModPodge comes out a little wrinkly), and think the patterns of the paper echo the pattern of the wallpaper in a nice way:

I still need to figure out some sort of changing table/dresser, want to get an ottoman, need to hem curtains, and am planning to sew some crib skirts, among other things, but I’m pretty proud of how the babies’ room is looking so far. I don’t think it screams “baby” or “pretty pretty princess” but it’s still girly and fun and colorful. I can’t wait to get it finished!

6 Replies to “nursery progress and a lamp DIY”