Friday was my birthday. I think 27 is going to be a good year. It was also the day of our “big ultrasound” or “anatomy scan” for the babies, the day we would finally find out if Baby B was a boy or a girl. 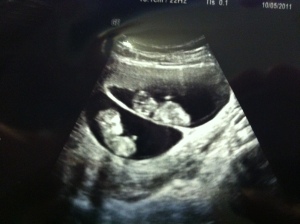 The tech was very sweet and showed us right away that we have two very wiggly baby GIRLS! Baby B, the one on the top if you remember this early ultrasound picture (they’re now too big to both be seen at once) is named Claire Elaine, and Baby A, the one on the bottom, is named Etta, with an as-yet-to-be-determined middle name. I’ll tell you all about the names and their significance later, I promise.

We got to see our girls kicking and punching and flipping around, and at one point, I swear they high-fived across the membrane that separates them. It’s so cool to think they’re already interacting, and that they will ALWAYS have each other. We couldn’t be more excited about them.

The atmosphere in the ultrasound room got a little weird right at the end of the scan. Instead of wiping me off and sending us on our way, the tech draped me with a towel and said she had to go talk to one of the doctors, who may come back in in a few minutes. We were soon joined by a maternal fetal medicine specialist with an all-business demeanor. She took the helm at the ultrasound machine and told us that Claire has a slightly lemon-shaped head, and this was a red flag that made them want a better look at her spine.

She then got to work looking at Claire’s spine, and I got to work freaking out. Hormones and fear took over, and though I was trying very hard not to cry so as not to have a heaving belly making the scan more difficult, the tears just came. I was confused and scared and all I had heard was that there was something wrong with my baby’s head and spine and no one was speaking to me in a way that I understood. Jon held my hand and tried to comfort me, but he was also trying to get all the information so he could explain it to me later, which I am very grateful for. I have never felt more like a mama bear than I did in that ultrasound room, wanting to protect my tiny baby girl.

Ultimately, Claire has what we hope is a best-case scenario of spina bifida. This is known as a neural tube defect, and means that her neural tube didn’t close all the way when her brain and spine were forming very early in my pregnancy. This means there is an opening at the bottom of her spine, in the section known as her sacral region. There is a little sac there, but there appears to be no neural tissue in the sac, which is a good sign. It’s hard to know how this will affect her until she is born, but she might have disability in her legs and some other issues. However, her legs looked good anatomically, and though the MFM specialist said that movement doesn’t necessarily mean anything in utero, she was kicking and wiggling her legs all around. She will most likely not have neurological or cognitive issues. The abnormality in her head shape is known as a Arnold-Chiari malformation. She might have problems with excess fluid building up in her head, which may require surgery and a shunt to drain the fluid, but we don’t know this yet either.

We do know that I will definitely be having a scheduled c-section, and that Claire will most likely be having surgery within a few days of her birth to close the opening on her spine. That’s all we know for sure.

We are thankful that the opening on her spine is down so low, and we are thankful that there appears to be no neural tissue in the sac. We want it to stay that way. We are thankful to be at UAMS, where we have access to some of the best specialists and surgeons around, and to know that our OB will definitely be there at the girls’ birth. I am personally thankful that I’m married to a pediatrician who can listen to all these doctors speak and translate it into a way that I can understand and that calms me.

We are so excited and so in love with Etta and Claire already. They are moving like crazy inside me, and every night at bedtime, they seem to have a little dance party. Jon has been able to feel them moving too, and it’s just the craziest experience in the world. I love that they’re still keeping a little secret to themselves, and that we won’t know until after they’re born if they’re identical or fraternal twins.

Friday was a hard day with a lot to take in, but after a couple of days of reading and settling in, we are feeling much better. We, all of us, are going to be OK.

*Update almost two years later: Claire’s spinal defect was more severe than originally predicted at this and other ultrasounds and ended up being a myelomeningocele that extended up to around L2. At this point, she is 17 months old, has had a shunt placed for her hydrocephalus, is crawling on her own, can pull to kneeling on her own, wears knee-high braces on her legs, and can stand with help and step with help. We have every hope that she will walk, though what types of braces or other support will be required remains to be seen. So again, more best possible bad news: the defect was worse than we hoped, but her abilities remain better than we might have expected with the location and severity of her spinal defect.

21 Replies to “good news and the best possible bad news”